At the end of my last post I was supposed to be working on some cloth books for bub but ended up making a wall hanging for her room instead.     Her bedroom has a park like theme.  It has a blue ceiling with clouds on it, a mobile with a little girl on a swing as well as butterflies, mushrooms, flowers and bees.    One of the walls is soon to have  a decal of a large tree with  foxes and owls and some pretty blue wings attached to her dressing table so I thought that this wall hanging with owls would fit right in.     At 2 am one morning last week I remembered that I had some sparkly blue butterflies floating around in a drawer in my sewing room which I added to the top of the hanging.

After completing the wall hanging it was still a cold and wet morning so I grabbed out some of those ever increasing scraps and made some pretty purse size  tissue holders.    One for me and the rest for my "giftie" box.    If you would like to make some of these quick and easy tissue holders the link is
http://www.quiltingboard.com/tutorials-f10/super-super-easy-tissue-holder-t107636.html 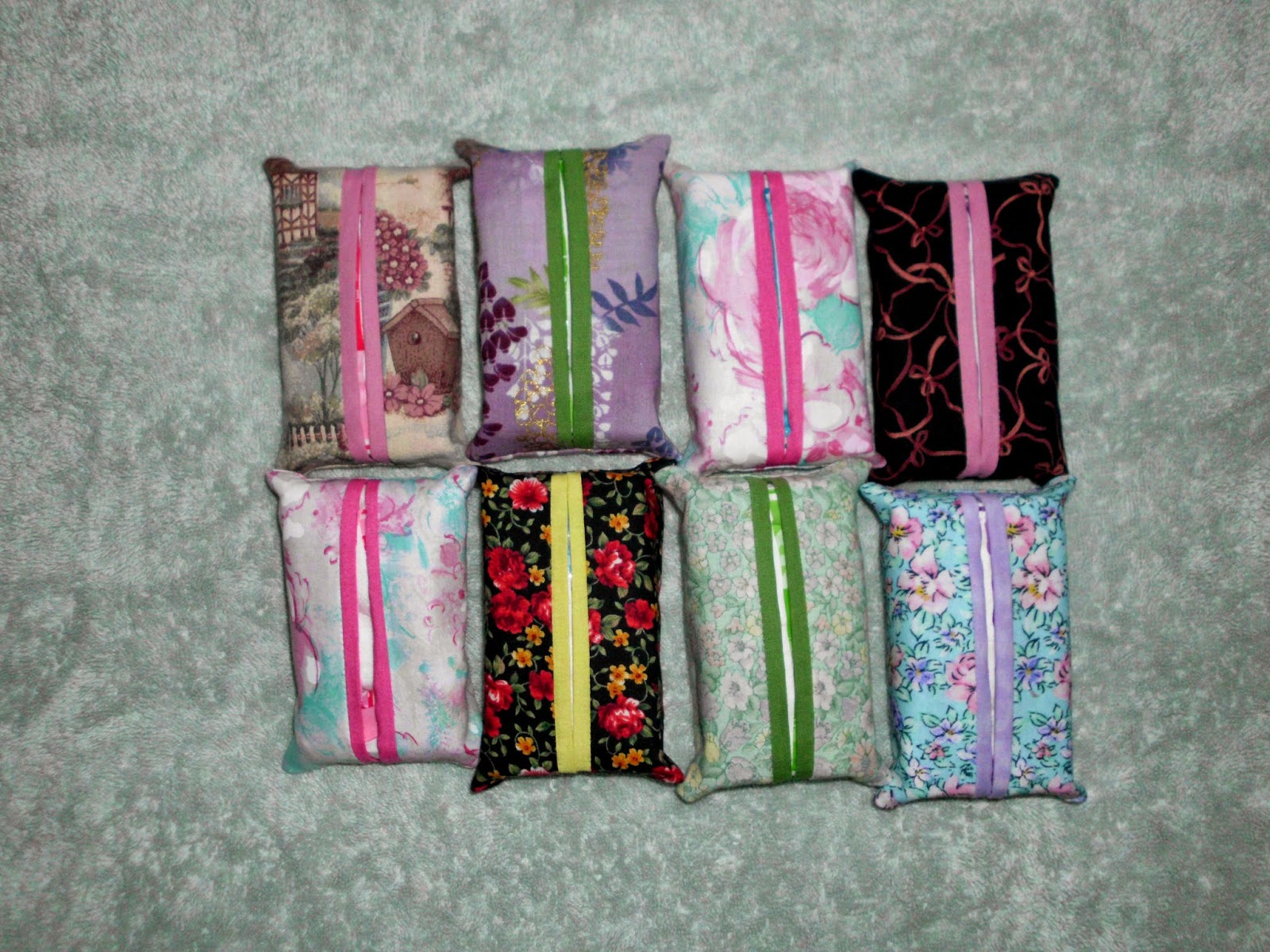 Now to get back on track I will make a start on the cloth book tomorrow.   While I was rummaging through my scrap pile today I found lots of suitable fabrics which will be used for the various shapes.

Suitable for a wing chair

Last year hubs bought himself a comfy wing chair and of course I decided that it needed a quilt to compliment it.     A couple of years ago I was given a gift voucher for my LQS and I bought a layer cake called  Independence Trail   which I was holding onto for the "right" project to come along.    After spending sometime on Google I saw this video at the Missouri Quilt Company website called Double Slice Layer Cake which showcased the fabric rather than cut  the squares into small pieces.

This is the quilt that kept going to the backburner while I was making baby clothes so I am pleased to say that it is finally finished and has had quite a few workouts during this rather chilly weather that we are experiencing at present. 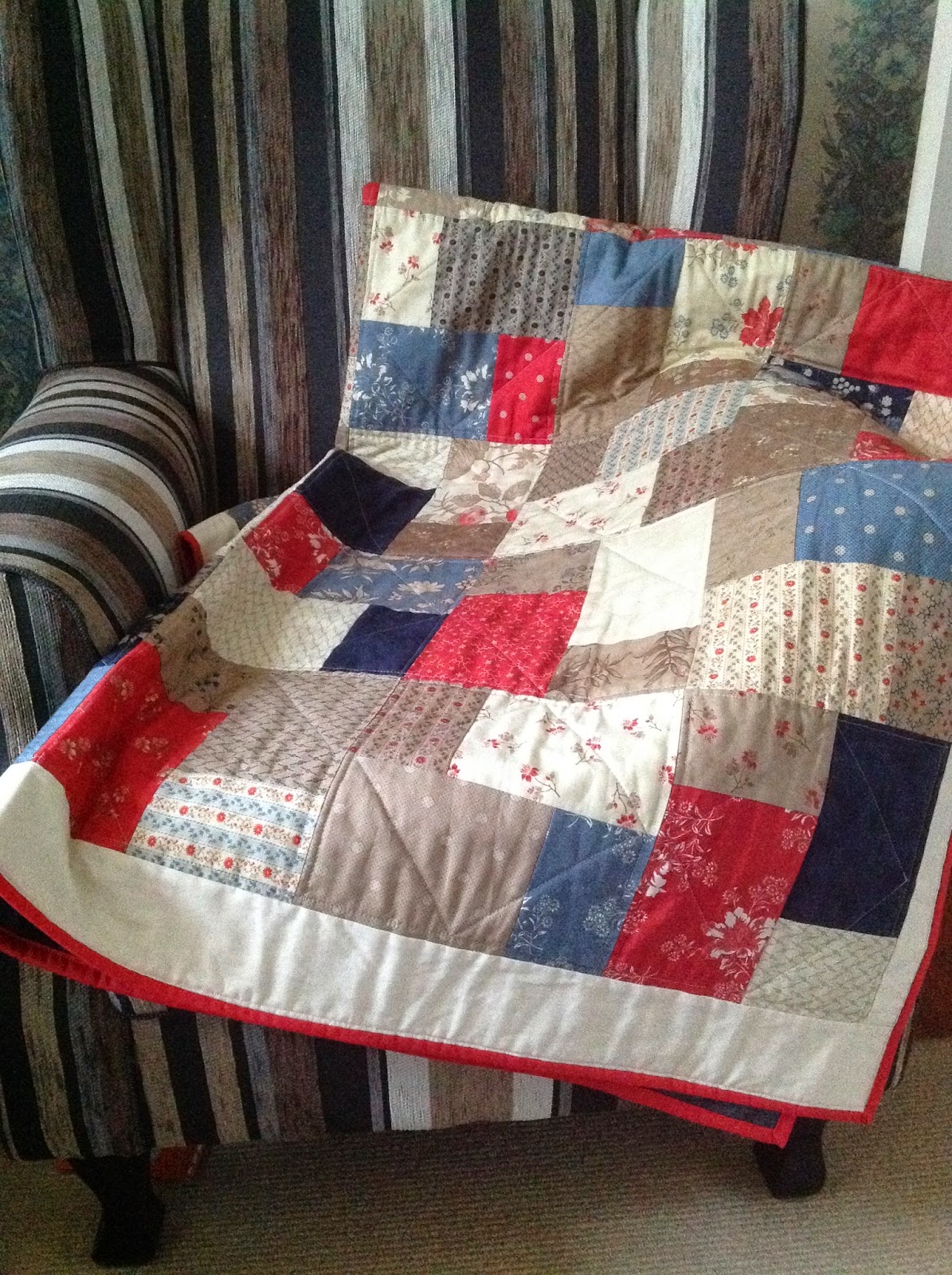 And the photo below shows the full quilt.  As hubs is a tall person I wanted the quilt to be longer than wider so I made the top and bottom borders wider than the side ones. 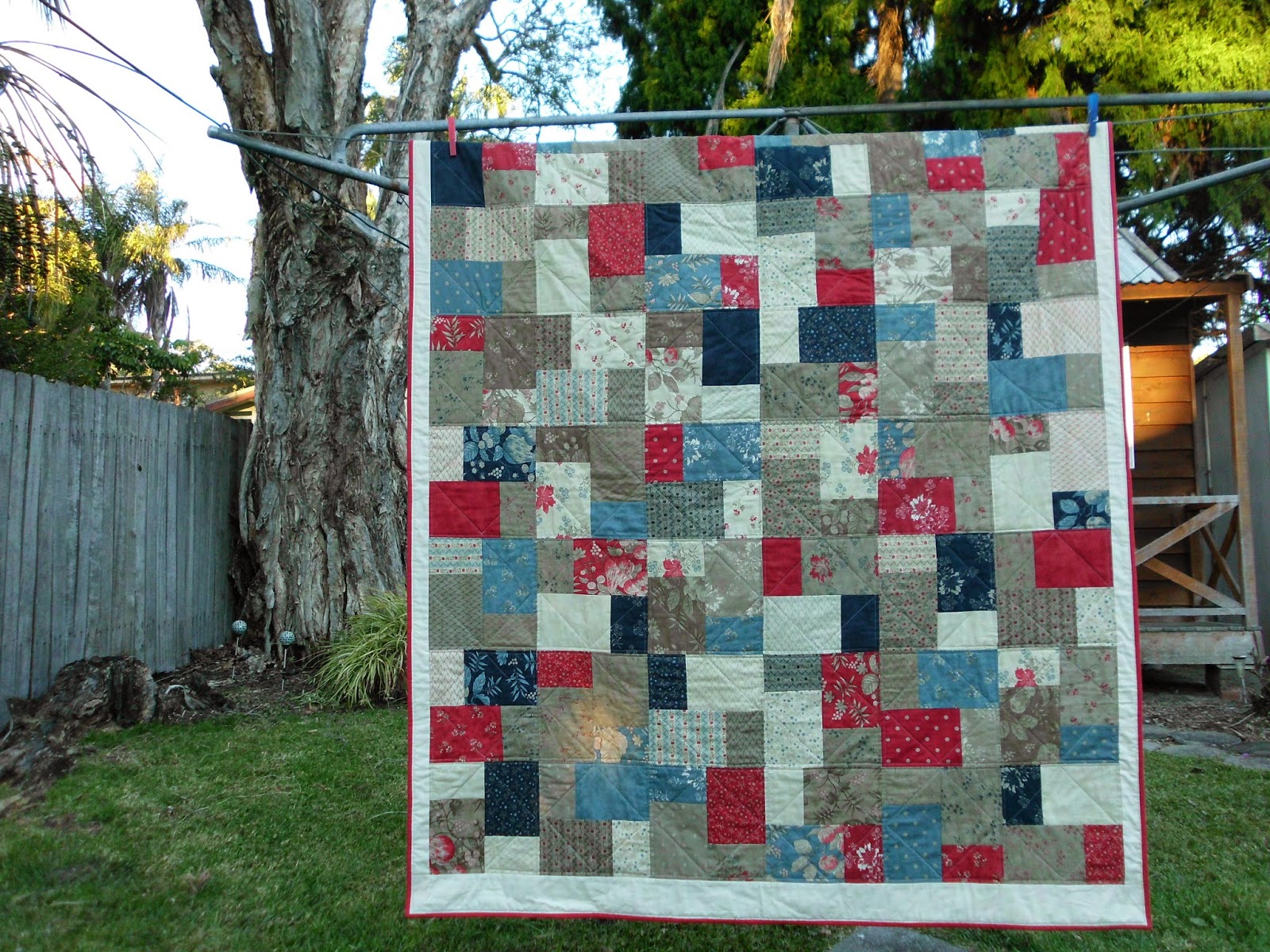 After finishing off the quilt I had to take time out to clean and tidy up my sewing room so that I could see the floor and gain back some much needed space which had become cluttered over a period of time.   A couple of  steel rods over the beams have given me hanging space for rulers and other bits and pieces to keep them off my sewing table.

Now onto the next project/s which are running around in my head.       I am tending to give priority to a cloth book for bub which will consist of simple shapes of bright colours which I will applique on.   As she gets a bit older I have some ideas to make a "quiet book" which will have a variety of things to do.   A google of quiet books reveals some many ideas.

I hope to be back soon with some photos of the cloth book and in the meantime happy sewing.