I had a mental "in order list" of little things that I wanted to sew but as always plans do get changed and in this case some  good friends have sold their Sydney home very quickly and are heading just over 2 hours north to enjoy a more relaxed and quieter  lifestyle at Tea Gardens.   This move was to happen around September so a small "good luck in your home" gift had to be brought to the top of that list.    Fortunately for me it was FNwF last night  and Chookyblue is hosting a Chookshed party all weekend which gave me permission to sew until I finished what I started......well that is my excuse for not doing anything else last night and again today.

I decided to go with a tabletopper and the recipient  like shades of brown - not my favourite colour but it is not for me - in order  to give it a  lift green was  used. 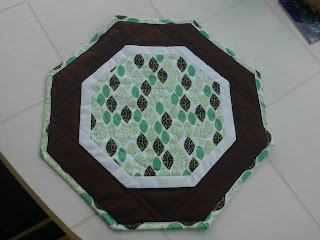 We are meeting them for lunch next week and after that they will be spending the rest of the time packing as the move takes place early July so you can see why the tabletopper was brought forward.    After giving it a press then having lunch it was back into the sewing room to make a start on the next item on my list which is a wallhanging for a cousin's daughter who is having a baby in August. 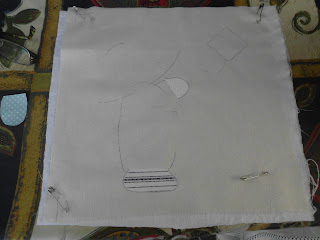 As I was going between my sewing room and the house there was an onlooker who was also on the lookout for his lunch. 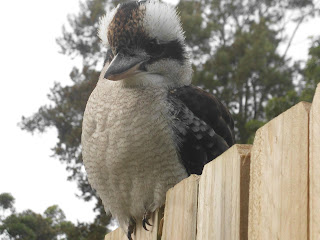 Sounds like you had a great day and made a new friend, lovely tabletopper.

How wonderful to have a visit from the kookaburra. Your table topper is great, well done.

Sometimes we just have to make adjustments. Your table topper turned out lovely. And the bird photo is great! What kind is it?

Great finish Karen...looks lovely. I bet those warm pants will come in handy!

Lucky you to have such a special visitor! Your table topper turned out great. Thanks for sharing with Oh Scrap!

Love the table topper Karen, I'm sure your friends will think of you each time they use the their table.

Your table topper looks great and reminds me of a choc mint biscuit LOL. Love your Kooka. We have a few here too.

Its nice to have an excuse to sew lol Lovely work!

We are a group of volunteers and starting a new scheme in our community.

Your site provided us with valuable info to work on. You've
performed an impressive activity and our whole group will probably be
grateful to you.