So being without a computer for just over 10 days did allow me to spend all that extra time in my sewing room and this is what I achieved.

I did sign up for FNSI but was not able to show what was made up until now.  Firstly was two ear flap hats for Miss M which were reversible as you can see below. 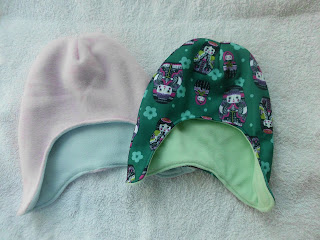 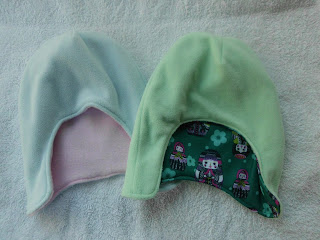 Then during the weekend I went on to finish off a matching top and pants set as well as a purple pair of pants.  The left over pink fabric was used to make the flap hat. 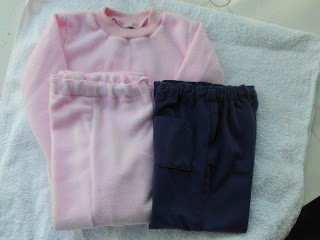 Still no sign of the computer being returned so time to pull out the mystery quilt that I had been working on and had put aside to make the clothes for Miss M.    All that was left to do was put on the binding and it was decided to go with a black and white star fabric to fit in with the black and white theme that I choose to form the stars in the design.    It is a bit hard to see the binding fabric in the photo. 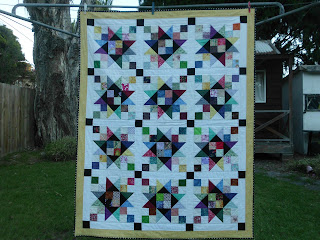 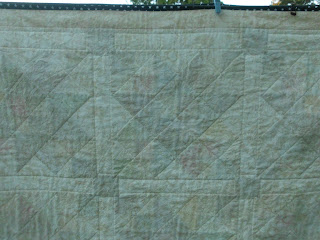 We are now up to the end of last week and I received the bad news that the computer was not going to return home so time to pull out the two smallish pieces of fabric that we were given at my quilt group and work on the challenge.   The top two fabrics used in the tree were the challenge fabrics and it was up to us what we made but the two fabrics had to be used.  Instead of quilting the wallhanging I decided to use a metallic thread and create little stars with one of the stitches on my machine. 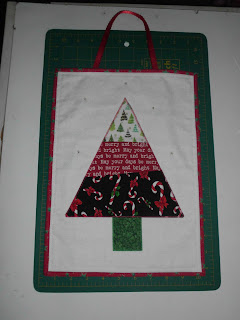 Being without the computer for that time made me realise just how much time is spent on looking what can be done instead of doing what could be done.  I will need to be strong now that a new computer sits in the empty space but I can see that there are so many new functions on Windows 10 that I will need to discover!

Linking with Friday Finished or Not and Oh Scrap.

What is missing from this picture?????

You can see a keyboard, a mouse and a power cord plugged into nothing and a big hole where my all in one computer which had been my faithful helper for the last 7 years  sat up until 10 days ago when it started having problems.    Off to the computer hospital where they ran all sorts of tests and replaced this and that but sadly I got the phone call on Friday of last week that there was no hope of a full recovery.    So hubs and I spent Saturday computer shopping and then came the job of transferring all the files from the old computer to the new one and today we are back up and running.  I did resist updating to Windows 10 on the old computer but decided a new start with a new computer so Windows 10 it is.     I have had time to have a little play late this afternoon and my fears of updating were for nothing - so far. 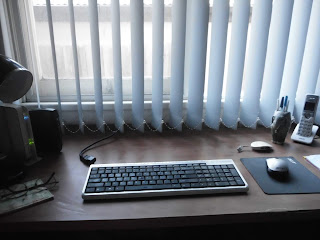 So what did I do while there was no computer to waste  spend time surfing the net on.   Fortunately I do have an Ipad so checking emails was kept up to date but for some reason the Ipad does not allow me to update my blog - obviously some setting that I have not ticked or clicked.

I did manage to get quite a bit of sewing completed and I will be back tomorrow to update my blog further.

A couple of finishes

Having a clean and uncluttered sewing room after yesterday's clean up was very theraputic and motivating to the point that I was able to convert some of those cut out items from last week into 3 garments for Miss M. 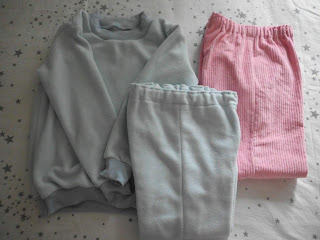 There are still a few more bits and pieces waiting to be sewn up and as it is FNSI tomorrow night I will take the  opportunity to try and make another couple of finishes happen.    Now that the cold weather is here these need to be finished sooner rather than later.    For the time being I have put all other projects - big and small - on hold.

If you would like to join in the fun tomorrow night hop over here and put your name down.

That I cannot remember the last time that my sewing room floor has been cleaned.    Today I took the vacuum cleaner to my sewing room for the first time since????? and this is the result 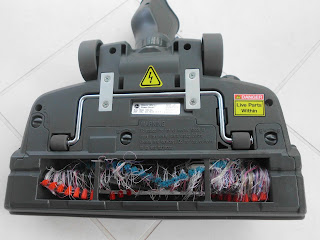 It took me over half an hour to clean the vacuum head of all the threads that had wrapped themselves around the brushes - half an hour that could have been spent sewing.

The floor looks bigger now that it has been cleaned and  tomorrow morning I will start the day sewing without any clutter around me.  That is a nice feeling.

It is lovely to go away and not have to do a thing but unfortunately all good things must come to an end and so it is back to reality - like unpacking,  doing the washing, folding and putting away clothes when they  are dry, shopping, banking, gardening, cooking etc.      It took me a couple of days but once I caught up with all those domestic chores  I was able to head straight to my sewing room first up this morning and make a start on cutting out some winter clothes for Miss M.

We have gone from summer to winter overnight as a cold blast of Arctic air swept up the coast  causing autumn to by-pass us this year.    I have a crate full of warm fabrics in the sewing room so it was a matter of getting out the scissors and just cutting, cutting, cutting until I had 4 pairs of pants and 3 tops cut out by lunchtime. 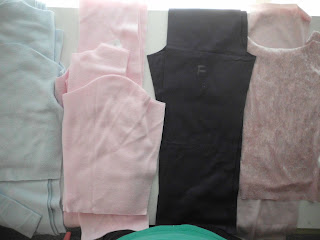 I spent the afternoon on the overlocker and hopefully will get a couple of items finished off tomorrow.

Hubs and I have not long returned from an 8 day road trip around the western area of NSW.    During that time we saw plenty of colourful trees 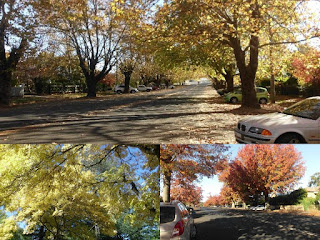 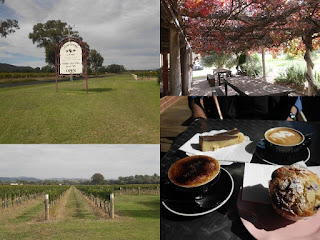 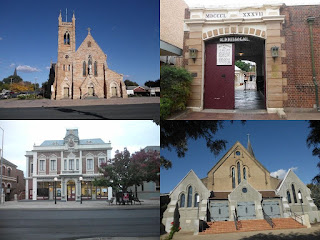 All of the country towns that we visited have very wide streets and the locals take a pride in their areas.  In the photos below is the township of Gulgong which features on the Australian ten dollar  note hence the name "Ten Dollar Town".     The statue is of the "jolly swagman" that the song "Waltz in Matilda" is about and is found in a park in Wagga Wagga. 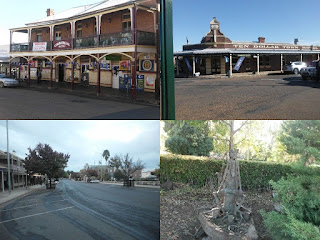 We were lucky enough to be up close  to the animals at Taronga Western Plains Zoo.   A zoo that I would recommend anyone visiting the area put on their "must see list". 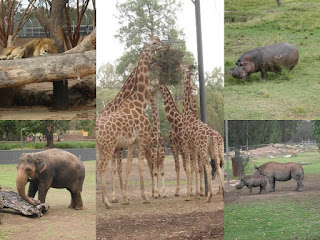 The Japanese Gardens in Cowra were very peaceful and serene to walk around. 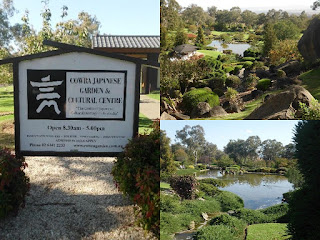 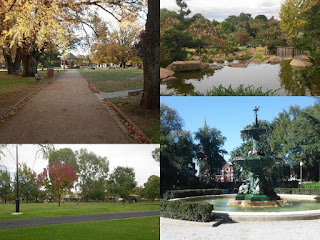 As well as fern and bergonia houses to walk through and enjoy. 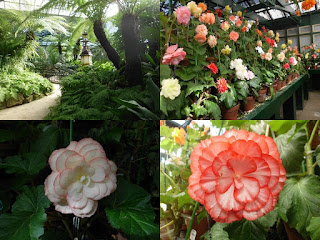 Once we left Dubbo and travelled further out west the plight of the farmers due to the drought became very evident everywhere we looked.    We were told that many of the farmers are having to sell off the livestock as they cannot afford to truck in water and feed for them.    It was very sad to see just how dry the countryside is out there.  I remember learning about the "mighty Murrumbidgee River" when in primary school and if you look at the first photo there is barely a trickle of water in some parts of the river.    The blue sign on the tree is a marker for the flood level in 1974 - that is not going to happen again for sometime to come. 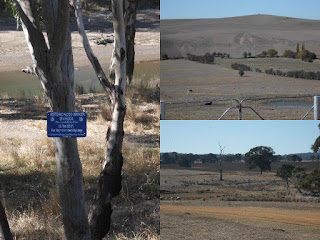 Hubs and I really enjoyed our "western road trip" and covered a distance of 1,650 kms during our time away.     We did however collect a souvenir at the end of our holiday which we could have done without - a cracked windscreen. 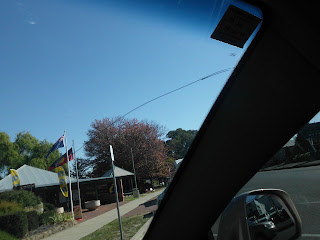 It could have been a lot worse so we consider ourselves very lucky.   A phone call to the insurance company has now fixed that problem and the car has been through the car wash and looks back to new again.

My one disappointment about the country areas was not being able to visit many fabric/quilt shops.    Many of the towns do not have one, the businesses have closed down permanently, there is one shop in the area and that was closed due being Saturday afternoon or Sunday when I was there and one was even closed with a sign on the door - "gone to the doctor".

Thanks for joining me on our trip out west - I hope that you enjoyed reading about it and seeing some of the photos that were taken.