My luck ran out

I have always considered myself to be lucky enough to get to my age...….3 score years plus a few.....and to never have been stung by a bee or wasp but that all changed late yesterday.     There I was out in my garden picking some lovely fresh little cherry tomatoes to add into our salad for dinner and spotted a few which were in an awkward position....down low with the best option to move the  table and go in from the patio side and that is when it all happened.

Unknown to me there was a wasp nest under the table so when it was grabbed and moved about 6 wasps were disturbed and all flew in my direction.   Fortunately I am still agile and able to move fairly quickly however one wasp  was quicker and took a liking to my arm by latching on....painfully.  I was able to flick it off,  race inside where an ice pack was applied and an antihistamine taken. 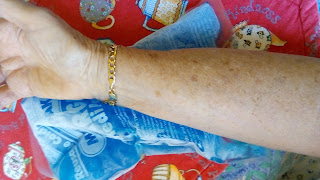 Once the sting had subsided somewhat time to get on with dinner and other duties.    Needless to say hubs and I did not eat dinner outside due to the fact that the wasps had become very active.     Just on dusk they had settled down so time to go out with the trusty wasp spray which has a very good spray jet that allows you to stand back safely quite some distance from the nest and direct the nozzle where it needs to go. 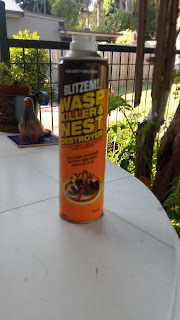 I was able to get all the wasps in one go.    That table has been in the same position for 20 years or more and used daily with never  a wasp seen near it let alone 6 in one nest under it.     We will be vigilant from now on and make sure to check under the table before using it.

These are the little tomatoes that were left behind in a hurry...…..I went back this morning to pick them plus others after doing wasp lookout duty. 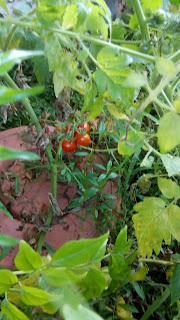 Today I have an itchy red patch on my arm - about the size of a small egg.     More ice has been applied and another antihistamine taken but it could have been worse - all 6 could have taken a disliking to me.

Another good day to stay indoors, keep cool, do some  sewing plus finish off the book that I am reading.

What do I think about when it is Australia Day.....how lucky we are to live where we do.    We have the freedom of choice, an abundance of food, access to good medical services and many other options which all make for a much sought after lifestyle.

I also think of the beach - always a tradition for those living along the coastline to visit on Australia Day as I did early this morning.    I was there just in time to see the sun coming up over the horizon. 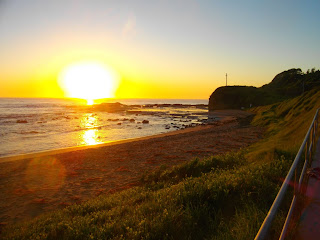 Then of course follows the traditional BBQ lunch of which hubs and I will enjoy  later on today.

I did get an opportunity yesterday afternoon to get the four red log cabin blocks sewn together which was my OMG  for January. 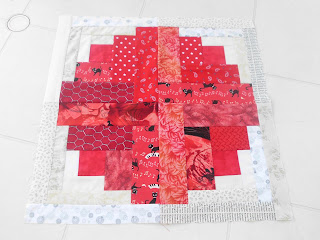 While the days have been very hot it has been a good opportunity to stay indoors where it is cooler and sew.     My overlocker and sewing machine have been busy as you can see below. 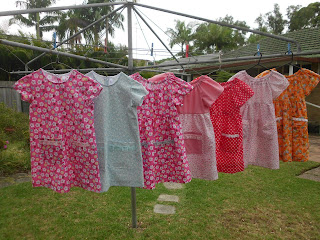 So far I have made 7 dresses.   Two of one style 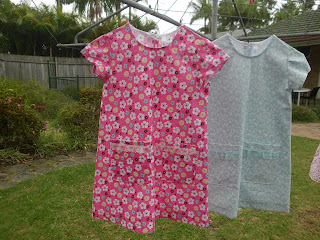 And five of another 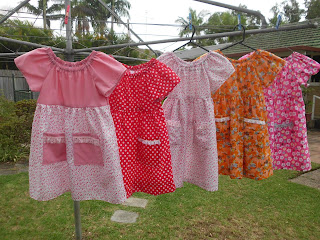 When these are delivered next week  I will get some fabric to make another batch and in the meantime  it will be back to finishing off my log cabin blocks by sewing the 4 of them together.

An early start has been made on FNSI today and I now realise just how time consuming it is cutting and sewing strips for my four red  log cabin blocks which were nominated as my OMG for January.   Now that I look at the photo the blocks  need to be arranged differently as some  of the fabrics are a bit too close together so before the next colour is announced for February hopefully these will be sewn together. 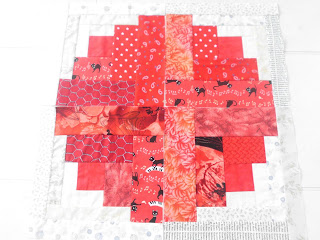 Once they were completed it was then onto finish off a dress for the charity that I have started making dresses for.  I  have joined forces with another lady to make size 6 and as  they need approx. 60 dresses of this size we will be busy over the coming months. 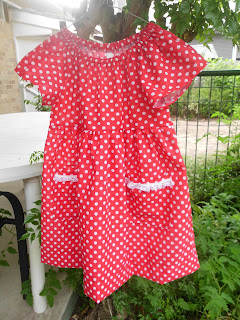 Thanks goes to Wendy for organising us again this year.

Linking with Em's Scrapbag.   So Scrappy   Oh Scrap.    Finished or Not Friday

The first Friday of the month means sewing with FNwF and  whilst plans are still being formulated in my mind for this year's sewing I did manage to make a small snap top bag.    Over the past two years quite a few glasses cases were made using metal tape inside the top casing to form the "snap" and during my travels around the "net" recently small snap top bags with a triangle  of fabric beneath the casing caught my attention so of course one had to be made. 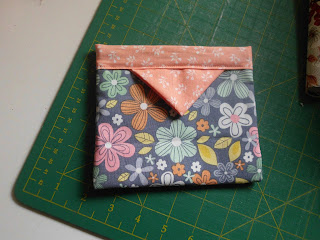 The Rainbow scrap challenge is being run again this year over at So Scrappy and the colour for January is red.....this got me thinking while going through my scraps for the snap bag that there is quite a lot of red  waiting to be used up. 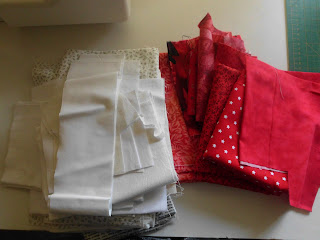 I have often thought about making a scrappy log cabin quilt using smaller strips on the light side of the block to give a curved illusion and I think that this will be the perfect project to work on during the year.     All that is needed to be done each month when the colour is announced is to make 4 blocks of that colour.     Each block will be 9" finished so when joined every colour will finish up at being 18" square.     Very doable.   My OMG for January is to make 4 red blocks.

Have you ever seen clouds like these before?    I have not and fortunately for us we escaped what came out of them later on in the day. 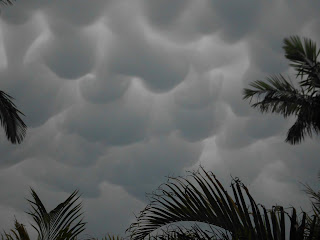 I hope that we are as lucky today as more wild storms are being forecast for this afternoon.

I along with 12 other ladies were invited to attend a "thank you" lunch by the organiser of the charity that my quilting group supports by sewing library bags throughout the year which are in  turn filled with stationery supplies and sent to disadvantaged  children in Sri Lanka.    Some of the ladies also make dresses for the little girls in orphanages and I have also offered to make some during the year.