Thunder and lightning and

What started out as a lovely sunny morning with a line full of washing swinging around in the wind suddenly changed to banks of large black clouds chasing the sun away, a mad dash to grab the washing off the line and a sudden clap of thunder followed by hail lots of hail 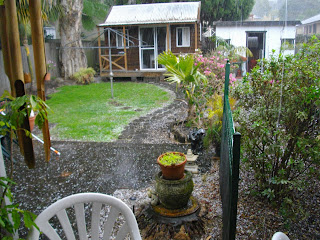 I am glad I closed the glass door on my sewing room as I dashed between the raindrops to grab the camera. Could have been a very wet mess to return to. 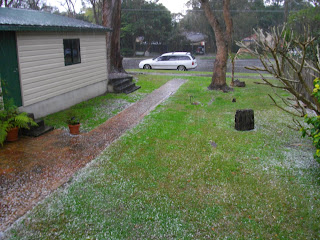 Not sure who owns the car out the front..I am only glad it was not ours..as there could be quite a bit of hail damage. Mother Nature doing her work again.
Posted by Karen's Korner at 5:47:00 PM 2 comments:

Last weekend I was lucky enough to be invited to attend the annual quilting retreat of the Eastwood Patchwork Quilters which was held at "The Hermitage" Mittagong. Setting off on Friday morning after breakfast we headed south across the Harbour Bridge which as you can see is hidden in all the fog which shrouded Sydney until mid morning. 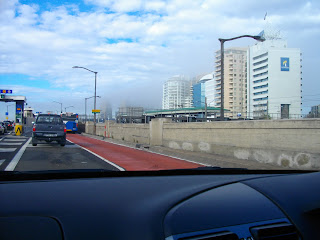 After arriving in the Southern Highlands and fortifying ourselves with some lunch and of course some retail therapy in all those lovely patchwork shops we arrived at the Hermitage mid afternoon. 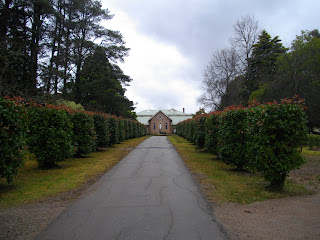 After setting myself up - or should I say spreading myself out - as you can see I have claimed a couple of chairs I made a start on my weekend project which involves using up my ever increasing scraps. 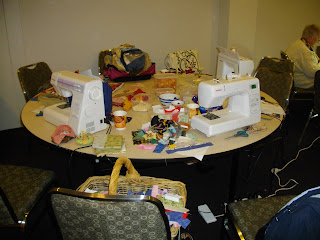 I cut up 6 and 3/4" squares of flannel (80 of them) on which to stitch and flip 1 and half inch strips. Each block has a medium blue in the middle and it goes out dark to black on one side and light to white on the other. 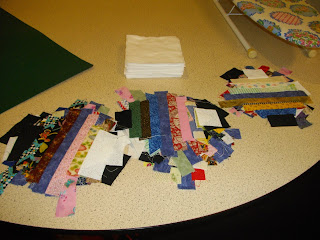 And looks something like this when pressed, squared and cut in 6 and 12" squares 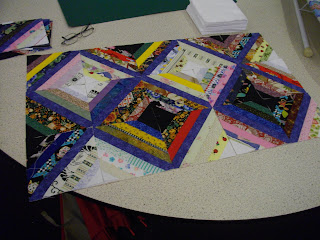 I surprised myself just how quickly these sewed up and I managed to get just on 30 all sewn up and cut into neat squares.

After a day of sitting, sewing, eating and talking I took myself off for a walk just on dawn to have a look at the surrounding countryside and catch up with a few of the locals. 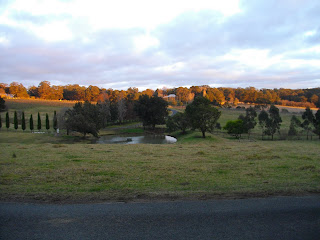 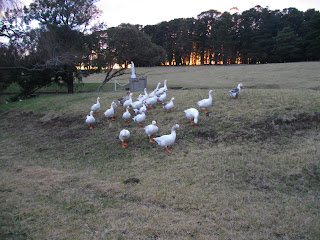 I know that I had a great weekend away and I am sure that all the other ladies that attended do so as well. I was even lucky enough to get some expert advice and tips on free motion quilting which I will have to put into practice sometime this weekend.

Thanks for stopping by and happy sewing to you all
Posted by Karen's Korner at 5:55:00 PM 6 comments:

My next door neighbour was doing the mail collection duty while I was away for the weekend and has just handed me a parcel. On opening it this is what I found 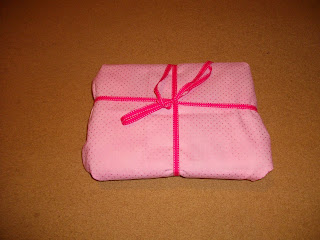 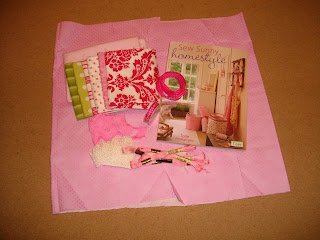 All these lovely goodies were sent to me by Barb of http://barbscreations.blogspot.com/ when I left a comment on her lovely blog. I will have to get my thinking cap on and come up with a project to do justice to all these gorgeous goodies. I am sure I will find something to fit the bill inside that delightful book.