Over the years I have seen on many blogs the letters "OPAM" with lots of lovely finishes being shown and this year I decided that it was time to  find out a bit more about this great idea.   An email was sent to Kris at Tag Along Teddies and now I am all signed up and ready to  join in the fun.

This month I was able to finish four projects which can be seen below. 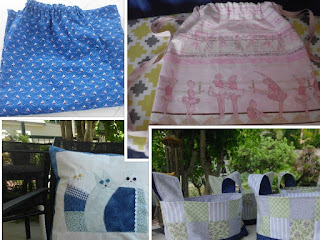 Hubs and I were confronted by this sign when going for our morning swim today. 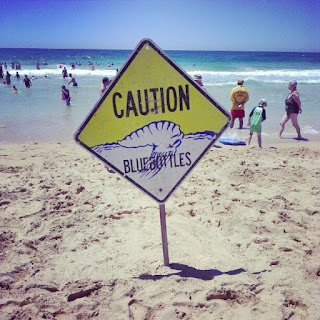 One look over the edge and sure enough the beach was littered with blue bottles - some of the biggest that we have seen. 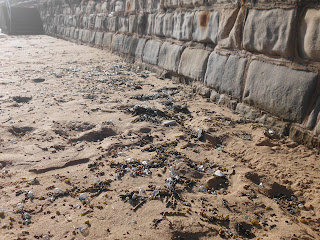 Not everyone on the beach was upset 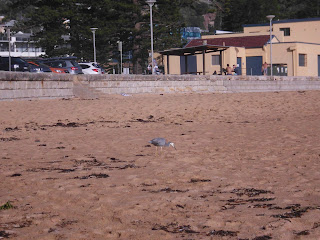 As you can see this water bird is having a feast.

I am pleased to say that we managed to get our swim in before the next high tide brought the blue bottles back on shore.

As a P.S. to my original post.    When typing the above it never occurred to me that so many had not heard of blue bottles.   They are the curse of every beachgoer each summer here in Australia.  I have put a link here to check out more about them if you are interested.

Something bigger than 2 1/2" squares 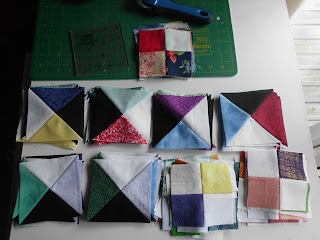 And move onto making a pair of sleep shorts for hubby.    It is hard finding suitable fabric for a male other than stripes and checks  so when I saw this print last week while shopping I grabbed it.  He can dream of drifting off to sleep in a sailboat. 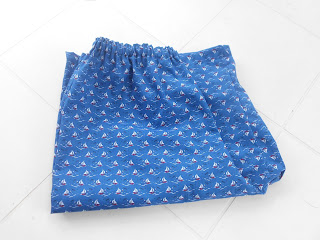 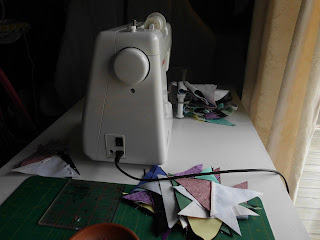 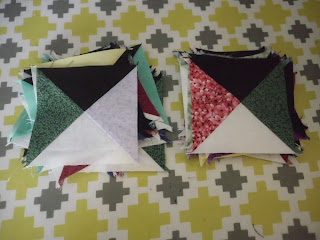 I was able to make an early start on FNSI and continued to sew up those 2 1/2" squares into 4 patch blocks.  Having the fabric pre-cut certainly makes the job go quicker.     Now comes the boring bit of trimming them up. 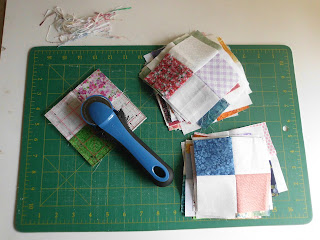 As you can see the ones in front are all neat and the pile at the back needs to be tackled.    A job for later on tonight.    You can only trim for so long...it is very tiring on the shoulders, wrists and hands.

Now the purpose for these blocks....this year was going to be the year of the small item for me but I could not resist another mystery train ride being held on a quilting forum that I belong to and while it will be a quilt - it is a lap quilt which when compared to a king quilt it is small.   It is all about interpretation!!!!!

The 48 4 patch blocks were the first clue and while the second clue has been revealed -  48 QST blocks I am working at a bit slower pace and hopefully will make a start on these over the weekend.

While the pile of 2 1/2" squares has been somewhat reduced there are still many left.    Another project using 2 1/2" squares will need to be investigated in the near future.

Thanks Wendy for hosting another fun sew-in.

In my last post I showed you  five purple and lavender fabrics with a touch of green in them well they have now been turned into four little baskets.    The same dark purple fabric was used to make the bases and the underside of the handles then it was just a matter of mixing up the 3" squares so that no two are together and each basket has a different lining that matches the topside of the handles. 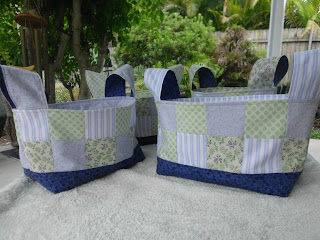 I did make some of the same little baskets quite a few years ago but they were smaller so this time I made them a bit larger.    All you need to know about making them can be found here including cutting directions for the larger size.

Also mentioned in a previous post there is an abundance of   2 1/2" squares floating around my sewing room - something is about to happen to those soon.

Blue was the colour chosen for January's Rainbow Scrap challenge and while I did show you what I made using up my blue scraps there was one item that I was working on as part of our daughter-in-law's birthday present and did not want to show it before giving to her. 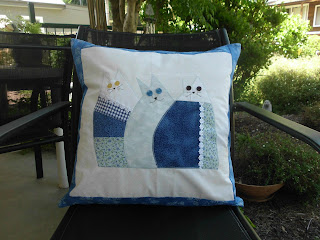 The cushion was a big hit and Miss M also fell in love with it and could not put it down.    I wonder who has it in their room now.....Miss M or her mummy!!!!!

Purple and lavender are the colours chosen for February's rainbow challenge and I have made a start  by gathering up fabrics that have purple and lavender in them as well as a touch of green and cutting them into 3" squares to make some little baskets. 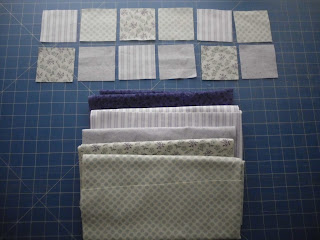 Is a must for every budding ballerina in which to carry her ballet shoes and seeing that Miss M starts ballet lessons this week that gorgeous girly fabric - which came out of the scrap bag that I showed you yesterday - was measured, cut and sewed into a drawstring backpack.    There was not enough in the length of the ballerina fabric to use as the front completely so I added a strip of the pale pink ribbon and music notes fabric at the top and bottom to centre the ballerinas  and used the dot fabric for the lining and backing.     I had the "ballerina pink" tape for the drawstrings so I was able to complete the bag in one go without having to race off to the shops.   Using the overlocker certainly speeds things up. 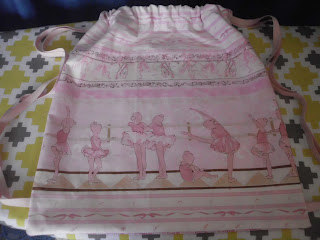 Pop on over to Gone Stitchin' to see what else was created overnight.

This was nominated as my OMG for February.  Linking with Elm Street quilts.

Where did January go.....it is already the second day of February and goals need to be set.    This month I will be working on two mystery items and  making a start on sewing up those 2/12" squares and strips as well as using the gorgeous fabric below.     As if I do not have enough scraps of my own I have to go and buy a  bag of them at the last quilt show that I went to.     The bag sat there and looked up at me all pink and pretty like so what could I do...leave it  - no way - out went my hand very quickly in case someone else snatched it. 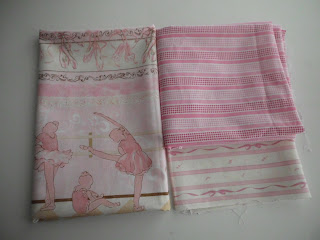 Now that you seen what fabric was in the bag I am sure that you would have done the same!!!!!  Not that there were any plans for it - I just had to have it in case of ?????

Don't forget that tonight is FNwF - what good timing for me to get to and make something using this fabric.

Back soon  with the result and in the meantime