During the week myself along with the two other sewists met with the co-ordinator of Network Heaven.   Anne wanted to discuss the possibility of trying to start up a "cottage industry" for middle aged teenage girls in various Sri Lankan villages.   Her idea was for the girls to learn to sew and make simple shopping bags which could be sold in their villages.   This would give the girls the opportunity to learn a skill which would be of benefit to them now and into the future as well as giving them some money to contribute to their families.

After much discussion it was decided that the best fabric would most probably be calico due to it being easy to access,  reasonably inexpensive and sturdy.     It was also decided that the girls would need to do French seams to neaten up the inside seams being unable to access an overlocker.  A pocket on the front was also suggested so that the bag could be folded up into itself.    Each of us now has a few weeks to make a sample bag which  Anne will take with her when she visits Sri Lanka next year.

I decided to have a play with the some fabric to see what I could do with the above requirements.   This is what I felt would be easy enough for them to draw up and sew.   I took a few design elements  from a couple of bags that I have and added them together to end up with this. 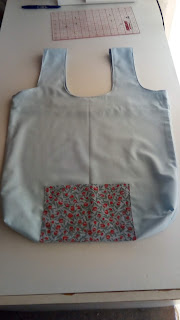 Here is the inside.  You can see the French seams on the inside.   I did cut the bottom of the bag on the fold in order to save sewing an extra seam. 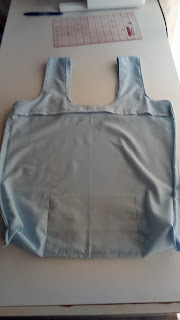 As you can see it is not fully lined in order to save fabric.  Only the handles were lined to give extra strength in that area and also topstitched around to give a nice finish.   The bottom corners were boxed but not cut off due to being raw edges.   Here it is all folded up into its outside pocket. 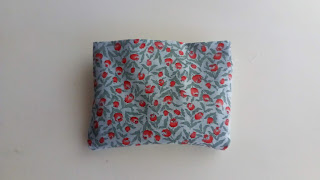 I have not yet seen what the others have come up with.   It will be interesting to see their versions when done.

Hi Karen what a great idea,lovely work my friend xx

What a wonderful idea, and a great finished product x