I was given this pretty and vibrant fabric a while ago and it is time that it was broken out of its packet. 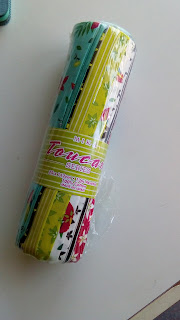 It has been taken out of the cupboard a few times looked at and put back as I was not sure how it was to end up.  The one thing I did know was that it was not going to be cut up into small squares as the toucans needed to be showcased. 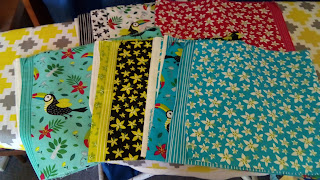 After much thinking out came a piece of paper to draw up a rough diagram.  (Every quilter can relate to the messy scribblings and measurements which would mean nothing to anyone else but themselves.) 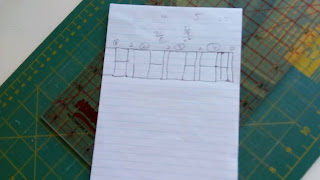 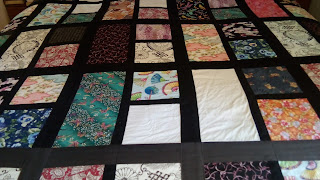 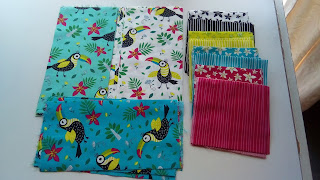 Getting the blocks together will be my OMG for February.
Back soon and in the meantime

Good plan! Good luck Karen in making your top, and doing justice to this lovely fabric.

This fabric quality is great! Anyway, I found another fabric store which is Broadway Fabrics.

What a fun pack of fabric to play with! Can't wait to see it progress.

Ooooh those fabrics are fun!
Hugz

Those are fun fabrics! Happy piecing!

Looks like it's going to be colorful and cute.

That is lovely fabric Karen, looking forward to seeing the completed quilt top.

What a fun range of fabrics. It sound like an achievable goal to have the blocks made. It’s going to be a bright, happy quilt.

I love what you are doing with the Toucan fabric packet! YOu have wonderful and fun projects going on right now that I will enjoy watching the progress on.