There I was getting ready for work on Friday morning and happened to look out the bedroom window and the two below were happily making their way around the back of the house. I saw them wandering around the park the day before however they obviously needed to explore further afield. After a couple of pecks in the garden they about turned and marched off again. They must reside in the wetlands across the road. 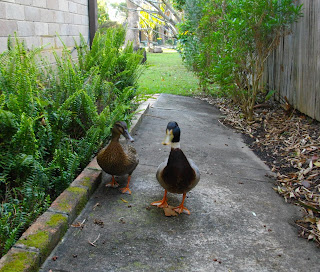 Yesterday was back to winter again, cold wet and miserable so what better than to catch up on the September BOM which I had fallen behind with. I had run out of the green fabric that I was using but found a similar fabric which is a close match. 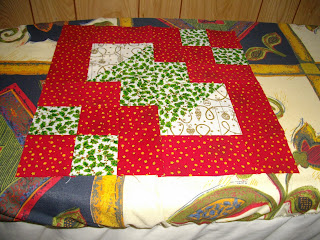 Now onto the October BOM. I will need to do a little adjusting on this one as I am using 3 colours as my theme.
Posted by Karen's Korner at 5:50:00 PM

Lurv the ducks:D Sooooo cute. Blocks are lovely too. Did I saw how cute the ducks were....lol

Love the ducks, the block is great love the colors.

The ducks are so cute & your block looks great.

Hi
I love the ducks, how lucky you are that they felt welcome in your garden. Love the colours of the Block.
TrishJ

I love the ducks, I have chooks and they are so precious to me! It's funny how animals can give us so much joy!
Blessings to you and yours!
Jilly
oxo