Is what I have called our new favourite dinner.  I saw the recipe on the "net" a couple of weeks ago and as usual I did not have some of the ingredients but did some substituting as one does and ended up with something delicious.     Best of all it is all cooked in one pan....that is my kind of cooking.   I gave it the name "East meets West"  because  the vegetables are stir fried - being the East part and the West part being the pasta.    The original recipe called for mushrooms but hubs cannot eat mushrooms so chicken was substituted nor did I use soy sauce due to the high salt content so extra lime juice was added.    As you can see it was a big pan so lunch today was leftovers. 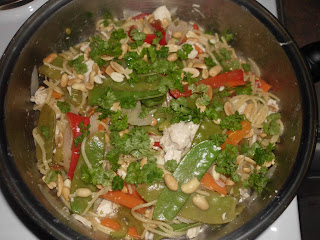 I was inspired after my spring walk on Tuesday to get my snowball blocks sewn together today.   It will make an ideal runner for spring on the dining room table. 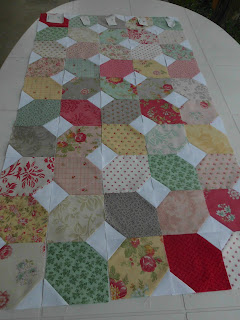 I still have just over a week to go before the end of the month so there is hope that this will be finished as it was one of the items nominated for September's OMG.

What a lovely looking meal - it made my stomach give a little rumble! x