I had originally planned to use the QAYG method  when putting together my rainbow curved log cabin quilt but having laid it all out it looked to be manageable to sew the blocks together and quilt it as a whole quilt.    During the week the 9 blocks were sewn up and an early start was made today to get it sandwiched and pinned. 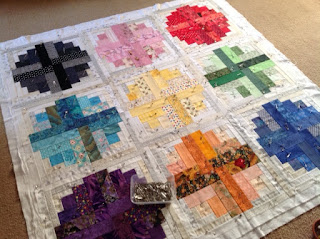 I really needed to get this done before tonight as the room that it is spread out in is where the tv is and I felt that hubs would not appreciate me bobbing around in front of him while trying to watch tv.

The next decision to make is how to quilt it but that can be for another day.   At least it is pinned and ready to go.

Time to hop on over to Cheryll's blog and check out what has been happening with the other crafters who signed up for FNWF.

Linking with Finished or Not Finished Friday.
Moving it forward

It's good to have it ready to quilt... maybe just ditch around each coloured block ??

Good job doing the pinning on the floor...and before TV time too!! I'm sure you will come up with a great plan for the quilting... such pretty blocks

It looks so lovely all ready to go. Happy quilting xx

Hi Karen this is so beautiful ,lovely work my friend,well done xx

You are organised having the quilt pinned ready to go... well done...xox

pinning is a must - you will be glad that bit is done. they look lovely all together.

I like it!! and!! if he wants to watch tv faster - give him some pins ha ha ha