The challenge that my quilt group has come up with to start off the year is for each member to decide on a block that they would like the other members to make for them.   The first block given out is called "Illusion block" and seeing that it is due back to it's "owner" next week I took the opportunity to use FNwF to make it up.  The block had quite a few pieces but did go together very easily and I think that it will be a very effective design when completed.     I have kept a copy of the instructions as I think that it could be added to the "to do list". 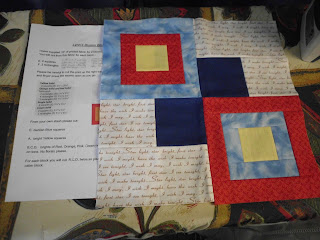 We were given the cream fabric and asked to use a yellow centre in the large blocks as well as a dark blue for the small blocks.   She also gave suggestions as to colours that she would like used.

Next week my block will be given out and I have requested the HST block.    I like the way that this block can be used in some many different ways to form various designs.   I will be supplying everyone with one 6 1/2" square of the same white fabric and asking that from their stash they chose a blue fabric - it can be light, medium or dark.

After finishing off the "illusion block" I made a start on cutting up my white squares to be given out as well as gathering a few blue fabrics which I will use to make some HSTs to add to those that I am given. 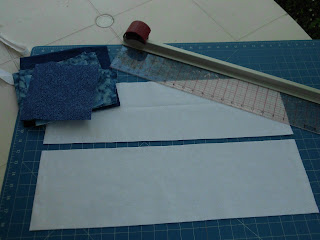 If you would like to see what the others who signed up for FNwF got up to just wander over here.

Time to head off and do a few  chores and sew today's circle which I am sure will have to reflect a domestic theme.    Back soon and in the meantime

That is a GReaT idea, block swapping. Thanks for joining in at FNwF too... xox

Thats a great idea - its years since I was involved with that sport of thing but you always end up with a great variety of blocks - enjoy your HST - and good luck with your 365 squares - picking a theme for each day could be challenging.

Hi Karen, your illusion block turned out so good - what a great idea to do a block swap like that!