The time has come to set my goal for March and looking back on what I had listed out for some of the goals that I would like to achieve over the course of the year I have finished the last 2 Sunbonnet Sues in the series that I was making, I used the cupcake fabric to make the apron for Miss M, the Star War fabric to make shorts for my daughter in law and finished off the cushion cover that I am giving as a gift.  The recipient  does look at my blog from time to time so no photos of that one yet.   That still leaves a few things that need to be finished off that were on my original list and of course I have found one or two more projects since then.

I have joined Quilty 365 late so my goal for March will be to catch up with my circles for January, February and March.   I am starting to make some progress as can be seen below. 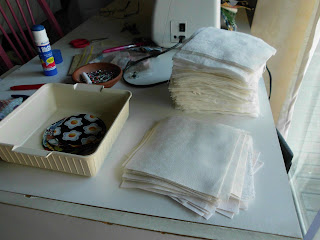 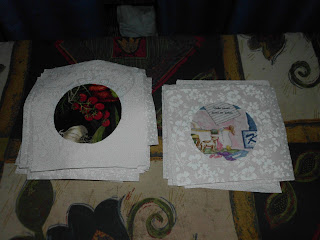 I have almost cut out the circles for January and February with just a few blanks to fill in.

Back soon with some progress photos and in the meantime

I think the 365 challenge is a fun idea and your circles look great. I thought of joining but didn't think I could keep up. I admire you for keeping at it!

Well done with your circles, the look great !!!

Your circles look great. There are people who started in October and others (me) who started after October, and yet others who waited until January to get a complete year. This project is really flexible so you can start and do whatever you want. I hope you don't stress yourself out by trying to catch up.