Nothing.....it is official that January has been the hottest on record and I have not been able to think sewing especially quilting as I am now up the stage of having to have the iron on in my sewing room and no more heat is needed so everything has come to a stand still.  Very frustrating to have the time to sew and not being able to get stuck into it.   Being the first of February means that it is time to set a goal for the month and me thinks that there is more heat to come so I will not be too ambitious and just try to quilt the first three rows of my 366 circles.    So far it is pinned and ready to go under the walking foot. 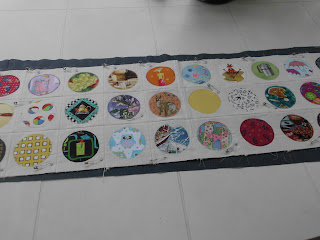 This is the first time that I have done QAYG and if it works out as I think then it will not be last -hopefully.

Good luck with your goal, those circles are so pretty!

Will be interested to see how your QAG turns out. I have never tried it, but the concept makes sense.

Looking forward to seeing how this looks quilted. Thanks for linking up with Elm Street Quilts One Monthly Goal and good luck on your February project.

I love the circles. I haven't tried quilt as you go yet either but there is one on my UFO list that I never even finished piecing maybe I will get to it one day! Hope the heat settles soon.

I love your 366 circles. I've never done any QAYG but I have seen some nice quilts that were finished using that method. I look forward to seeing your progress.

Best of luck with quilting in the heat and with QAYG. Congratulations on getting 366 finished!

I love your circles, Karen! Circles are on my 'someday' list! I look forward to seeing your quilt at the end of February!

I love your circles!

Good idea to go easy on yourself when it's so hot--hope you get your fun circles quilted!

love your circles have seen a lot of these this past year - I did one too!