Bibs and other things

Last month I told you that I was going to make either a Sunbonnet Sue or Sam wall hanging  for a friend's new grandchild which was due early March but the new parents did not want to know what they were having so I had to wait before making that decision.   Well they had another girl and that got me thinking that perhaps  I  should make something else for the new bub so that big sister felt a bit special and had something different as her gift from us.    Big sisters can sometimes feel a" bit left out" when a new baby arrives on the scene so with that in mind I decided to make a couple of patchwork bibs instead.  It was interesting to think back when cutting up the fabric what it was left over from. 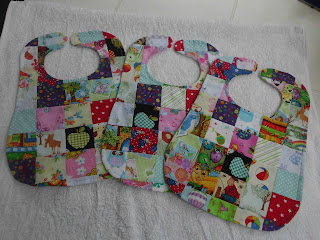 I used this pattern for Miss M when making her bibs a few years ago and found that they were a good size and the velcro fastening can be adjusted as necks grow.   I put flannelette on the back which is soft and also absorbent.

Next  item on my list in the sewing room was some in-between long pants for Miss M now that we are in autumn although the temps are far from autumnal but the time will come and it will be a bit too cool for shorts and twirly skirts.   I had already made another pink pair but forgot to photograph them before handing them over.  Miss M requested pockets in these as we all know that 3 year olds have many treasures which need to go with them during the day. 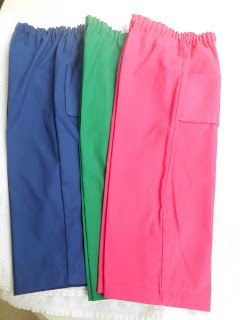 Next on the list is to start cutting out the fabric for Miss M's winter quilt.    I hope to make a start on that tomorrow.

The ptchwork bibs are so pretty - it's a great idea to back them with towelling.

Those scrappy patchwork bibs are so cute. What a wonderful idea! Thanks for sharing with Oh Scrap!

Those patchwork bibs are so cute! And the pants, too - such great gift ideas for kids!

The patchwork bibs are very fun! Such a clever idea. I like the trousers too - pockets are definitely a must-have! x

Those bibs are so cute that I am almost drooling over them :-D