Has been put into my daily circle quilt.  Nothing was going to come between me and a finish today and seeing that it is FNSI tonight I headed straight  to my sewing room after breakfast to make an early start just in case the day came "crashing down" around me again.   Yahooo!!!!   Here it is.   The photo shoot was done inside due to the size of the quilt and also it is raining. 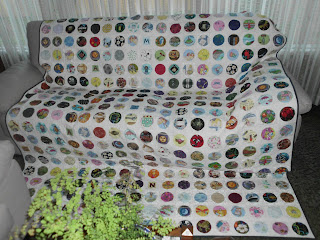 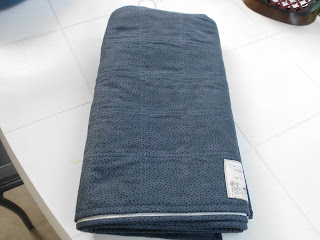 Some statistics regarding the quilt -

Each square was cut 4 ½” to finish at 4”.    There are 366 squares with 3" circles on them which represents something that I did or happened each day.       There are  12 squares with letters on them to represent the beginning of each month making a total of 378 squares.   The quilt ended up being 72” x  84”.       I joined 3 rows at a time,  quilted them  then joined the backing and next three rows using the QAYG method without sashing as I wanted to see the whole year complete rather than looking at smaller sections that would have been created if  sashing  had been used and therefore broken that continuity.

I found out about 365 daily circles while doing some blog hopping and  started  the first of my circles back in March 2016 making this a 12 month project.    I did find it very “addictive” and really enjoyed having an excuse to play around with my scraps to find the “right” piece to represent each day.     The process of putting it together  became very boring towards the end and I was  pleased to put in the last stitch.      I knew while making  the  blocks and leaving the construction all to the end would be  major work but I was not sure how I wanted to put the blocks together.    At one stage the thought was to  put 6 months on the front and 6 months on the back and then one day there was a “light bulb” moment  when I saw  a scrap piece of fabric with letters on it which then gave me the idea to use those letters to represent each month to create a "calendar".    It is  named  “This was 2016”.

Thanks for following my journey over the last 12 months.

OMG! What an awesome quilt! I love how it represents each day of your life in 2016/17. I would love to try circles but I can never seem to get them perfectly round. Great idea using the QAYG method. You should be very proud of yourself girl!

Hello! I just would like to give a huge thumbs up for the great info you have here on this post. I will be coming back to your blog for more soon. DailyTechStudios Clothing

Such an amazing quilt! Yay for your finish! It looks beautiful x

Wow, what a mission and an achievement! I did a similar thing with a snail mail group, but we just made a block for each month - but had to make the same block 6 times to send out to all the other participants.

This is stunning, well done on an amazing quilt :)

Wow...what an amazing piece of work.

Wowee! Your quilt is just amazing! What a wonderful project to do. It must be so special to be able to reflect on your year via your beautiful quilt xx

Fantastic! I would so love to see this quilt in person and get to look at all the blocks!

That's a wonderful finish! Congratulations to you for pushing through to get it done!

Amazing Karen! Big applause for sticking with it. Your quilt is beautiful! Thanks for sharing with Oh Scrap!

It looks wonderful and congratulations on your finish.

Woo Hoo Karen!! yipee! it looks fabulous... well done, what a big commitment that was!

Quilty 365! woot! nice job on the finish! I really like the simple quilting and the backing material. What is the backing made from? (I am doing #2017quilty365 this year!)

Hi Karen! Your quilt is gorgeus! I'm so happy you could keep on the whole year! x Teje

Congrats on a very fun finish!

Congratulations on a fantastic finish!
That really is an amazing accomplishment and a fabric journal!

Congrats on a beautiful finish :)

Way to go on finishing! What a wonderful quilt you have to commemorate your year!

What a wonderful quilt! I like your plain background...really makes the circles stand out. I'll be back to gaze at it for inspiration...I'm just starting month 5 of mine!

Fantastic! I love it. What a wonderful journey.

Love it! What a great finish and so smart to do it the QAYG method too! Thanks for linking up.:)

Great setting idea for your circles! Congrats on finishing!

Wow! Yours is finished! And what a great finish and quilt it is! Congrats. I've never tried the QAYG method on any quilt but it sure looks tempting.