Is something that I remember a great aunt of mine doing many years ago.  It was fascinating to watch her hands move around a metal object called a "shuttle" and this amazing fine work would emerge.   I have a good friend of mine who has taken up tatting and she too produces some amazing fine work from her shuttle and I was lucky enough to score this pair of pretty earrings from her when we met up yesterday. 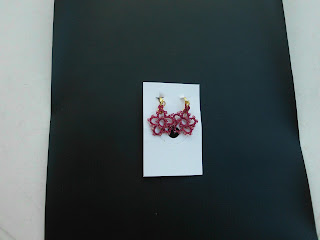 If you would like to find out more about "tatting" and see some of the work that is produced by others just pop over here to the Tatters Guild of Aust NSW Branch.

Last week after finishing off my sunshine colours for the Rainbow Challenge and having a play with some layouts for the blocks I felt that  two more colours were needed in order to be able to make a single bed quilt with a bit extra on the sides.      Out with the scraps to see what colours there were many of and trying not to duplicate what was previously made I added in "black and white" and also "red with a touch of colour".     These have now been cut, trimmed and all sewn together as can be seen below. 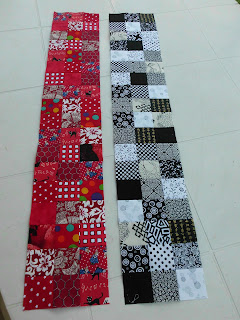 Next step is to lay them all out in some sort of order - I am thinking of going with the order in which the colours given throughout the year - but that will remain to be seen.

Hi Karen ,love those earrings ,how cute and your blocks are looking great,well done .

What lovely earrings. I used to buy stationery that had tatted flowers on it--years ago. I always thought it was pretty. The earrings your friend gave you are lovely.

The new rows for your rainbow quilt are lovely.

I'm hopping by from the Oh Scrap link up. :)

LOve the earrings!! Some people are so clever and talented. Your rainbow rows look gorgeous.